WASHINGTON — President Obama may have thought he was giving a straightforward history lesson at the National Prayer Breakfast on Thursday when he compared the atrocities of the Islamic State to the bloodshed committed in the name of Christianity in centuries past.
But that is not how many of his longtime critics saw it.
“The president’s comments this morning at the prayer breakfast are the most offensive I’ve ever heard a president make in my lifetime,” said Jim Gilmore, the former Republican governor of Virginia. “He has offended every believing Christian in the United States.”

Jim Gilmore
Rush Limbaugh devoted a segment of his show to what he said were the president’s insults to the “whole gamut of Christians” and Twitter’s right wing piled on. Guests on Megyn Kelly’s Fox News show spent 15 minutes airing objections to the president’s comments.
“Lest we get on our high horse and think this is unique to some other place, remember that during the Crusades and the Inquisition, people committed terrible deeds in the name of Christ,” Mr. Obama said. “In our home country, slavery and Jim Crow all too often was justified in the name of Christ.” 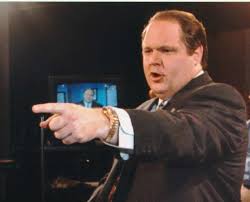