How You Can Take Charge Voting Tomorrow 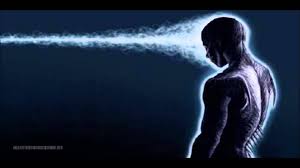 You have  authority  over the devil who  controls evil doers- politicians  and their helpers   in Jesus Name. This is  based on your rights and privileges  in Christ.

It is time to wear your spiritual armour to quench all the fiery darts of the enemy.

Kenneth E. Hagin says, “our  authority over the devil doesn’t  depend on how long we pray and fast, but we do  need to know who we are in Christ”.

Jesus Christ appeared to him and revealed how to destroy the work of demons and this secret works in other situations too. So,  all you have to do among other revelations that  you may have is to say,
“you foul spirit that is operating and  manifesting yourself in the life of anybody to disrupt this election here, I command you to stop in your  operations now. I command you to cease and  desist in your maneuvers, in the  Name of the Lord Jesus  Christ”.

Take note. You are dealing with the devil and demons not human beings. Your authority is in  the Name of Jesus Christ. This is the simplicity    of the  gospel. You don’t even have to  shout.

Do this at home, do this on your  way to voting, do this  while you are  voting and declare that the  will and  choice of God prevail. Believe what you say and receive what you  expect and it become real in your hands.

Like Bishop David Oyedepo says in his book, The Release of Power, “It is one  thing to be in charge, and another to know that you are. Every one that has ever done exploits for God was aware that he was in charge. When I talk to sickness or  the devil, I talk to them as one in charge. I am so conscious of it that it has  become  my lifestyle". 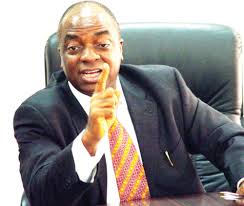 Bishop David Oyedepo, "When I talk to sickness or  the devil, I talk to them as one in charge".

First, Nigeria is your Canaan land. The  devil has positioned giants to deflate your  power and confidence  to take your Canaan land. So, you must join other responsible believers to destroy the devil's power  to do evil in this election.  You must  step into a “position  of having control or responsibility for a group of people or an  activity”.

That  means for the voting activity  that takes place tomorrow 8:00am across Nigeria to succeed,   you must be personally responsible  for it and for  those who are not as  privileged    as you to  know what to do.

Second, you must personally command  control over  the whole voting  processes and environment.

It is generally believed that voter’s card is your power. That is a partial truth, not the whole truth. 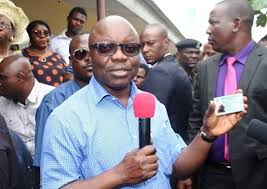 Dr. Emmanuel Uduaghan, Governor of Delta State in Nigeria, showing his voters' card
Your real  power is in  the influence you can exert.  It  is the power  that triggers motion from a state of partial or full  inertia. Your real influence is in the spirit realm where things are commanded to happen in the natural.

“Vision defines your mission, your destination, and God’s purpose for your life, while dedication sets the pace for how far  you can ever go. But it is  faith that powers you for accomplishment from  one phase of your assignment to the other. Hebrew 11:2 says: for by it (faith), the  elders obtained a good report.”

That is the statement of Bishop David O. Oyedepo a man  who has accomplished globally in his book  "Unlimited Power of Faith".

Our vision  and mission for this election is free, fair,credible, transparent and crisis free election.

Yes, evil  shrines are agog with demonic empowerments now, the evil ones are charging up, the air is filled with   terror in statements and actions.

This is why we must live in the reality that,
“...we are not fighting against people  made of flesh and blood, but against persons without bodies- the evil rulers of the unseen world, those …satanic beings and ..evil princes of darkness who  rule this world; and against the huge  numbers of wicked spirit  in the spirit world”. Ephesians 6:12.  (LP).

But your good, loving, merciful e.t.c. God has  by His grace " ,… raised us (including you) up with Christ and seated us with Him (Jesus Christ) in the  heavenly realms in Christ Jesus”, far above these wicked forces.

Even when the dispensation of  grace was not in operation, Daniel was appointed to be ruler  over the whole province of Babylon, as well as chief  over all the wise men of Babylon. Daniel 2:48(LB) 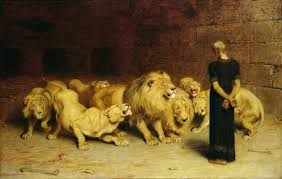 Daniel safe in the lion's den.

These wise men were magicians, enchanters, soothsayers, sorceress, diviners, astrologers, incantationists. Daniel   was head over the representatives or the physical manifestors of the “ the evil rulers of  the unseen world, those… satanic beings and ..evil princes of darkness who rule this world”.

It is instructive  that Daniel never had any special revelation that brought him to the  public domain of proininence . He got there by  positioning  himself   for  it. This he did  through  the gift of  God and the knowledge that he had knowing that there is a God in heaven who reveals secrets and  places or removes anyone from the throne.

So, how do you take charge?

You must be willing to discharge the power of God in you like Daniel did. Only God possesses power. And the power to be in charge  on the earth including make this election, peaceful has been given to you and every believer irrespective of gender, color or  age.


“All power is given unto me in heaven and in earth. Go ye therefore and teach all nations.”

This is the power that made you a Christian in spite of  what the enemy did to keep you in  his dark kingdom. God delivered you from that dark kingdom of wickedness into the kingdom  of His dear son.

This is the power that has built and continues to build the church and satanic power has not been able to prevail  over it. And will not prevail over it.

This power impact on the value of human life, compassion and mercy, marriage and family, education, sane government of the people, free enterprise  and the  work ethnic, art, music, literature etc.

In a debate D’Souza says, ‘My celebration of Christianity’s role in shaping this great social changes comes with a sober corollary: if the  west gives up Christianity, it  will also  endanger the egalitarian values  that Christianity  brought into  the world. The end of Christianity also  means the systematic erosion of values like equal  dignity and equal rights that both religious and secular people cherish”.

God looks for a man. Be that man. Practice what you believe.

I expect your comments on how you were among those that exercised their God given  spiritual power to ensure a successful election 2015  in Nigeria.
at 8:54 AM