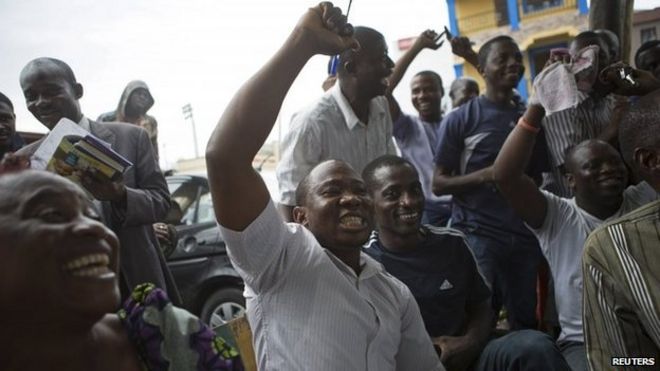 Gen Buhari's supporters have been celebrating as final results come in


Opposition candidate Muhammadu Buhari is on the verge of a historic victory over Nigerian President Goodluck Jonathan, with most votes counted.
Gen Buhari, a former military ruler, is ahead by almost three million votes, with results still to come from just three states.
Analysts say it is hard to see how Mr Jonathan can overcome this lead.
The opposition has never won a presidential election in Nigeria, Africa's most populous state.
Observers have generally praised the election but there have been allegations of fraud, which could lead to protests and violence.
More than 800 people were killed in protests after Mr Jonathan beat Gen Buhari in the previous election.
Results so far:
Gen Buhari: 14.2m votes;
Passed 25% threshold in 24 states
Mr Jonathan: 11.4m votes;
Passed 25% threshold in 24 states
Results from 33 states + Abuja
Candidates needs 25% in 24 states for first-round victory