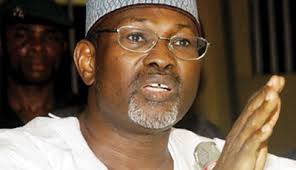 The Chairman of the Independent National Electoral Commission (INEC), Professor Attahiru Jega has said only two states has finished collating their results.
Giving an update on the general elections in the INEC Situation Room in Abuja, Professor Jega said that “as I speak to you, no original results have arrived here yet.
Very few states have collated results, I know that election results in Ekiti are collated.”
He advised Nigerians to be careful about making candidates winners because it is only INEC that can announce the winner.
Answering questions about INEC ad hoc staff not being paid because they are on contract, Prof Jega said advance payments were made and the balance would be paid after the election.
Collation of Results
Professor Jega promised that the commission would not commence collation unless the media is there to witness the exercise.
He said further: “We are doing our best but there would be lapses, every laps we identify is a lesson; inadequacies of materials, late commencement of election would not occur in other subsequent elections.”
Speaking further on the challenges INEC has had to contend with in this election, Prof. Jega said: “Crowd control is a challenge because a lot of voters came en mass to cast their votes. We would prepare for that in the subsequent elections.”
On the performance of INEC so far, Prof. Jega explained: “In general, there have been a remarkable improvement in the 2015 presidential election to the elections conducted in 2011.”
He also dismissed the hue and cry over the failure of the card reader, saying that it is insignificant given that only 1.25 per cent failure rate has been recorded out of 152, 000 of the device used.

The  INEC Chairman  also  said the Commission,  “commends the security agencies for their vigilance and dedication” and added that "In the course of the elections yesterday, the Commission has received reports of security challenges in some states that were repelled."
at 1:34 PM