Obama Details His Disappointment With Netanyahu In First Post-Election Comments 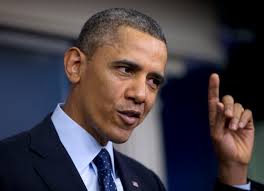 Sam Stein, Huff Post
WASHINGTON -- President Barack Obama is operating under the assumption that Prime Minister Benjamin Netanyahu does not support the creation of a Palestinian state, despite the Israeli leader's post-election efforts to recast himself as amenable to a two-state solution.
"We take him at his word when he said that it wouldn't happen during his prime ministership, and so that's why we've got to evaluate what other options are available to make sure that we don't see a chaotic situation in the region," the president said in an interview with The Huffington Post on Friday.
Though he pledged to keep working with the Israeli government on military and intelligence operations, Obama declined to say whether the United States would continue to block Palestinian efforts to secure statehood through the United Nations. In a phone conversation the two had on Thursday, he said he indicated to Netanyahu that "it is going to be hard to find a path where people are seriously believing that negotiations are possible."
In his first public comments on Tuesday's elections in Israel, Obama's deepest discomfort was saved for Netanyahu's Election Day warning about Arab Israeli voters going to the polls "in droves."
"We indicated that that kind of rhetoric was contrary to what is the best of Israel's traditions. That although Israel was founded based on the historic Jewish homeland and the need to have a Jewish homeland, Israeli democracy has been premised on everybody in the country being treated equally and fairly," said Obama. "And I think that that is what's best about Israeli democracy. If that is lost, then I think that not only does it give ammunition to folks who don't believe in a Jewish state, but it also I think starts to erode the meaning of democracy in the country."
The president's comments cap a geopolitical backlash sparked by Netanyahu's statement on Monday that a Palestinian state would not be established on his watch. The Israeli prime minister has since insisted that he remains open to a two-state solution under very specific, restrictive conditions. But the damage appears to have been done, with the White House offering only the most perfunctory of diplo-speak to obscure its frustrations. (Photo: Damon Dahlen/The Huffington Post)
While he expressed worry about the strain that Netanyahu had placed on Israel's democratic fabric, Obama did not see the Israeli prime minister's electoral victory as having a tangible impact on current negotiations over Iran's nuclear program. With just days to go before those talks between Iran, the U.S. and five other countries are scheduled to wrap, Obama offered a markedly sober assessment about the prospects for a deal.
"Frankly," he said, "they have not yet made the kind of concessions that are I think going to be needed for a final deal to get done. But they have moved, and so there's the possibility."
Standing in the way of that final deal, according to recent reports, are lingering disputes over limits on new types of centrifuges that Iran wants to develop and the pace of international sanctions relief to be given to the country after a deal is struck.
Negotiators took a hiatus for the observation of Nowruz, the Iranian New Year. The president on Friday encouraged everybody involved to use that time to grow more "comfortable with the current positions that are being taken."
"Our goal," he added, "is to get this done in a matter of weeks, not months."
Besides the pressing international matters, Obama also discussed challenges on the domestic front. In forceful terms, he chastised Senate Republicans for holding up his attorney general nominee, Loretta Lynch, and encouraged Democrats to buck demands that they first pass a human trafficking bill with a controversial anti-abortion provision.
"You don't hold attorney general nominees hostage for other issues," said Obama. "This is our top law enforcement office." (Photo: Damon Dahlen/The Huffington Post)
An even bigger fight between the parties could be on the political horizon. The president flatly said that he would not sign an appropriations bill to fund the government if it did not alleviate the spending cuts brought about by sequestration. With spending cuts set to return in October 2015, his declaration ups the ante for lawmakers and portends another government shutdown showdown.
"I’ve been very clear. We are not going to have a situation where, for example, our education spending goes back to its lowest level since the year 2000," said Obama. "We can’t do that to our kids, and I’m not going to sign it."
Even without Congress' input, there are initiatives that Obama can pursue during his closing year-and-a-half in office. During the roughly 25-minute interview in the White House Cabinet Room, he said that two major ones will be coming.
"Relatively soon," Obama said, he will be raising the annual salary threshold at which companies are required to pay overtime to employees who work more than 40 hours a week. The president didn't tip his hand as to how much he would lift the current level of $23,600.
In addition, Obama said he would be exercising his pardon and clemency powers "more aggressively for people who meet the criteria." There has been ongoing criticism that he has utilized those powers less than many of his predecessors.
One place where Obama will not go in the closing months of his second term is back to the negotiating table over a "grand bargain" on long-term deficit or debt reduction. Despite Republican criticism that a crisis still looms, he insisted that the times allow for a different approach
"The truth is, is that circumstances changed," said Obama, when asked why he no longer highlights issues like entitlement reform. "At that time, we were seeing significantly higher deficits, and the economy was just beginning to grow. We now know that we’ve got strong growth."
His unwillingness to re-open those talks he had in 2010 and 2011 isn't indicative of some ideological drift, he added. Asked if he'd become a more progressive president over time -- as recent comments from his former top adviser Dan Pfeiffer indicated -- the president answered, emphatically, "No."
"What we have done," Obama said, "is consistently looked for additional opportunities to get stuff done. ... By hook or by crook, we're going to make sure that when I leave this office, that the country is more prosperous, more people have opportunity, kids have a better education, we're more competitive, climate change is being taken more seriously than it was, and we are actually trying to do something about it. Those are going to be the measures by which I look back and say whether I've been successful as president."
at 5:38 PM