POPE Francis, on Tuesday, hailed the bravery of Nigerian priests who have stood strong in the face of Boko Haram violence and worked to build bridges with the Muslim community, the Agence France-Presse reported.
“How can we fail to remember the priests, religious men and women, missionaries and catechists (lay teachers) who, despite untold sacrifices, never abandoned their flock, but remained at their service,” the Argentinian Pope said in an open letter.
“I wish here to express my heartfelt thanks to you, because in the midst of so many trials and sufferings, the Church in Nigeria does not cease to witness to hospitality, mercy and forgiveness,” he said.
Francis slammed the militants as “people who claim to be religious, but who, instead, abuse religion, to make of it an ideology for their own distorted interests of exploitation and murder.”
He urged the African country’s church to continue “to favour reconciliation, to promote experiences of sharing, to extend bridges of dialogue, to serve the weakest and the excluded.” 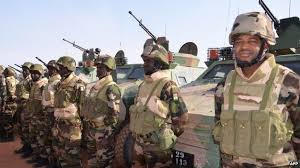 A four-country joint offensive against the militants, part of efforts to stabilise North-East Nigeria in time for general election set for March 28, it will be recalled, has claimed a string of successes in rebel-held territory in recent weeks.
NigerianTribune