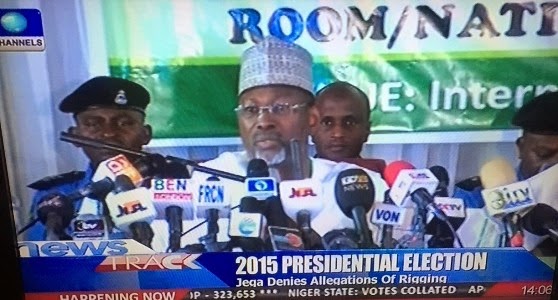 After PDP party agent Godsday Orubebe created an embarrassing scene at the collation centre in Abuja this morning, trying to disrupt announcement of results  a very calm Jega told him;

Jega's response to Orubebe has been hailed as mature and worthy of praise. In fact, there's a meaning for Jega now. 'Jega' - meaning - 'To be inexplicably chilled in the midst of stupidity or conflict". lol. Prof Jega's full response after the cut


"You have made two comments. One is that you submitted a petition  which I refused to accept. Secondly you claimed that there was a result released by the APC which you alleged that we gave to them or I gave to them. With regards to the first point, yesterday after we took the first batch of results in this hall and as we declared a recess until 4pm, as I was walking down back to the office, my PA came to me and said that here are some papers that Dr Bello Fadile, a representative of the PDP said that he should collect it; that I said Dr Fadile should give him those papers. I told him that I didn't tell Dr Fadile to give any papers to you. Return them to him because Dr Fadile, after we declared for recess came on to this platform. As a party agent, he is not supposed to do that and gave some documents to my PA who is writing results here. and I am sure some of the agents and some of the pressmen may have seen that and I told my PA to take back those documents to him. If he told you I told him to give you any documents, I did not. Take them back to him, Subsequently, Dr Fadile sent me a text message saying that there are petitions and that he wants to submit them. I told him we don't collect petitions on the platform when we are declaring results and then he said I should have left my office open so that they can submit those petitions in my office. I told him our secretary, the secretary to the commission is not anywhere in this hall. She is in her office and that her business is to receive communication. If they are important enough, she would bring them to me here. I have started collation. I cannot be receiving petition in this hall or in this platform. And when I replied that text message, he replied again and said Okay, he will see what he can do. I interpreted the text as he was going to take that petition or whatever document he has to the secretary of the commission. As I speak with you now, I have not received anything from the secretary to the commission. That is regards to the issue of the so called petition.

Regarding results published by APC on its website, I do not give results to anybody. The results were announced formally as INEC are results declared here. And we have warned everybody to be careful and to ensure that the do not declare results which we have not officially announced. So as far as I am concerned I have not seen any results. I have not given anybody any results. So for you to even engage me on that issue I think frankly that is not fair to me. I have not seen the results. How can I speak on something that I have not seen. So please let us be careful of what we say or do so that we do not disrupt a process that has ended peacefully and in a matter of hours we would be able to finish it.". Jega said