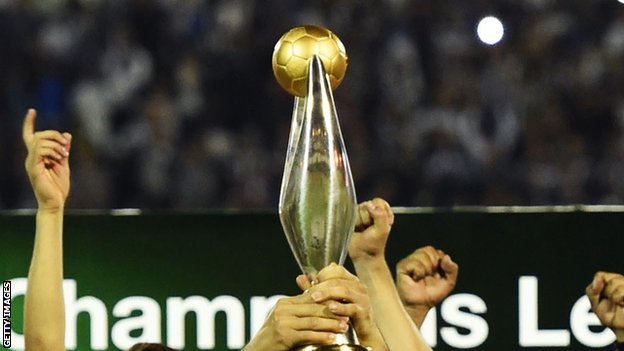 All four Nigerian and South African contenders are in danger of being eliminated from the Champions League this weekend at the last-32 stage.
Nigerians Enyimba defend a precarious 1-0 lead over Egyptians Smouha on Sunday in Mediterranean city Alexandria.
And Kano Pillars must stage a miraculous comeback in northern Nigeria on Saturday to survive having crumbled 4-0 away to Moroccans Moghreb Tetouan.
South Africans Mamelodi Sundowns are in a similar position to Enyimba after establishing only a 1-0 lead over Democratic Republic of Congo visitors TP Mazembe.
Soweto side Kaizer Chiefs are much worse off as careless defending at a free-kick led to a 1-0 home defeat by Moroccans Raja Casablanca three weeks ago.
Sundowns play on Sunday afternoon in mining hub Lubumbashi and Chiefs go into action five hours later in the Moroccan commercial capital.
Nigeria and South Africa are the economic giants of Africa and boast two of the most competitive domestic leagues on the continent.
But both nations have struggled to make their mark in the premier Confederation of African Football club competition with back-to-back victories by Enyimba a decade ago the only Nigerian triumphs.
South Africa have been even less successful with a lone Champions League - then called the African Champions Cup - triumph coming through Orlando Pirates 20 years ago.
While Enyimba, Pillars, Sundowns and Chiefs face tasks of varying difficulty, the quartet were speaking optimistically this week.
Kadiri Ikhana, who coached Enyimba to 2003 Champions League glory, said he had a plan to combat the cold evening weather expected in Alexandria.
"Our preparations will include lots of running and I do not envisage the cold having a negative effect on us," he said. 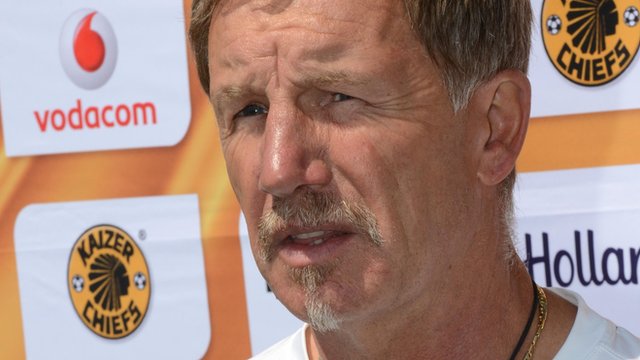 Kaizer Chiefs boss Stuart Baxter is confident his side can turn around a 1-0 deficit against Raja
Centre-back Chima Uluocha added: "We view the game as a cup final that must be won at all costs. We are ready to withstand the cold and any other challenges."
Pillars striker Adamu Mohammed insists the four-goal deficit can be erased at the Sani Abacha Stadium in Kano.
"We have resolved to give our all - to score even more than four goals and not concede any," he said.
The greatest comeback in the competition was in 1979 when Tanzanians Simba lost 4-0 at home to Zambians Mufulira Wanderers, then won 5-0 away.
"Our tie with Raja is far from over," was the battle-cry from Chiefs England-born coach Stuart Baxter. "We did well enough in the first leg to realise that."
Sundowns' Dutch captain and centre-back Alje Schut believes much will hinge on the experienced Ethiopian match officials in DR Congo.
"We hope for a fair game and I think you know what I mean by that. If it is a fair game, then we have a chance."
Orlando Pirates said they were the victims of bias by Seychellois referees two years ago in a dramatic Lubumbashi qualifier.
The South Africans lost the game but won the tie thanks to two penalty saves from Senzo Meyiwa, who was murdered during a house robbery near Johannesburg last October.
North African giants Al Ahly, Esperance and title-holders Entente Setif look set to reach the last-16 stage of a competition offering a $1.5m first prize.
Egyptians Ahly, champions a record eight times, host Rwandans APR with a two-goal advantage and Tunisians Esperance returned from Cameroon with a one-goal lead over Cosmos Bafia.
Algerians Setif fought back to hold Real Banjul 1-1 in Gambia and it would be a shock if the Black Eagles slipped up at home.
Kenyans Gor Mahia trail AC Leopards 1-0 ahead of the return fixture in Congo Brazzaville and the famous Nairobi club are battling to fund the trip to central Africa.

Posted by Ambassador T. Brikins
at 4:21 AM