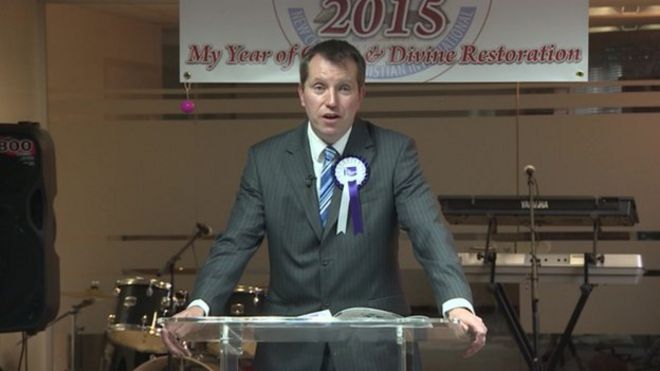 Jeff Green wants to end a "culture of fear and intimidation"

The party says it proposes banking reform, led by the Bank of England, to reduce the national debt.
Party leaders say it focuses on issues such as the sanctity of life, traditional marriage and British constitutional law.
The party is fielding nine candidates in the general election.
The manifesto covers 12 policy areas, including banking.
"Although everyone is talking about the deficit, we should be concerned about the nation's debt which has doubled in 10 years," it says.
"In recent years, legislation, government policy and court judgments have contributed to the tearing apart of our society's moral, relational and spiritual fabric, providing a seedbed for a host of problems.
"It is an inevitable consequence of turning our back on God's pattern for society - with huge ramifications."
Jeff Green, leader of the party, said: "We believe that unless we protect our hard-won freedoms - and they were hard won - unless we stand up for this, we see the culture of fear and intimidation continue across our nation and we can't allow that to happen."
The candidates standing in the general election are:
Jeff Green, Cardiff North
Dr Donald Boyd, Inverness, Nairn, Badenoch and Strathspey
John Cormack, Western Isles (Na h-Eileanan an Iar)
Trevor Bendrien, Halifax
Juliana Brimicombe, Surrey Heath
Pastor Gabriel Ukandu, Birmingham Edgbaston
Laurence Williams, Old Bexley and Sidcup
Dominic Stockford, Twickenham
Gabriela Fajardo, Westminster North