In Nigeria, 'Buharism' will need to modernize fast 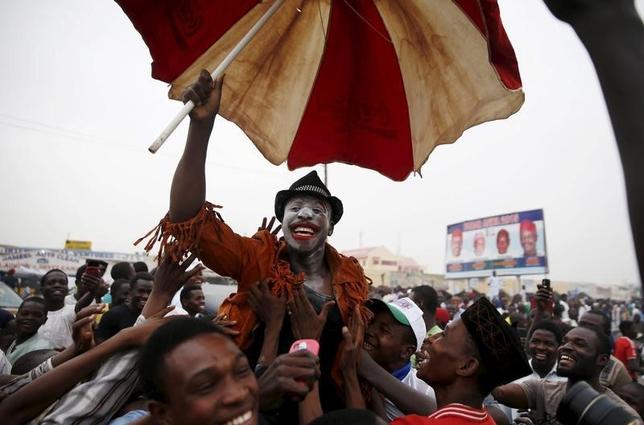 Supporters of the presidential candidate Muhammadu Buhari and his All Progressive Congress (APC) party celebrate in Kano March 31, 2015.
Reuters/Goran Tomasevic

(Reuters) - As Muhammadu Buhari sat in front of the TV watching his election victory unfold, Nigeria's future president took care to be photographed beside a Muslim elder and a bishop, a choreographed statement of unity in a religiously mixed nation.
More importantly for investors, over the left shoulder of the purple-robed bishop was a smiling figure in a sharp grey suit: Aliko Dangote, Nigeria's most celebrated business magnate and Africa's richest man.
An ascetic former military ruler, Buhari built his stunning electoral landslide on promises to clean up Nigeria's notoriously filthy politics and get tough on the Boko Haram insurgency raging in the northeast.
He returned to those themes in his first official speech as president elect, stressing a zero tolerance approach to corruption and saying he would "spare no effort" to defeat the Islamist militants who have killed thousands in the northeast.
It is less clear what his victory means for Africa's biggest economy, under pressure from the collapse in the oil price, but Dangote's grinning, capitalist presence in the sandal-wearing general's inner circle at his moment of triumph looks reassuring.
In the most glaring endorsement of Buhari - as well as relief that the elections avoided the violence of previous polls - the stock market leapt more than 8 percent in the immediate aftermath of his win.
Bonds also climbed, while the naira, which has lost 20 percent of its purchasing power in two devaluations since November, gained 0.5 percent on the black market to 217 to the dollar. It remained fixed at 197 in official interbank trade.
'NEW BUHARISM'?
This is not to say all is set fair for the 72-year-old, whose last time in office was 20 months as a military dictator in the mid-1980s.
Then, his response to a yawning trade gap and runaway inflation was to fix prices and ban "unnecessary" imports, rather than let the currency depreciate, under a disastrous economic program dubbed 'Buharism'.
For good measure, he also cut ties with the International Monetary Fund and ordered his soldiers to whip people who failed to form orderly queues at the bus stop.
Buhari's political views have mellowed since then, and his relationship with Dangote, whose business empire stretches from cement to pasta, suggests his economic ones have gone the same way.
But he faces many dark clouds on the horizon.
From President Goodluck Jonathan, who stunned Nigeria's 170 million people with a gracious concession speech, Buhari inherits an economy decelerating sharply from the 7 percent annual growth to which it has become accustomed.
Standard and Poor's cut Nigeria's credit rating two weeks before the vote and Fitch lowered its outlook on the eve of the polls - both moves that will increase Abuja's borrowing costs.
Meanwhile, the oil price languishes at around $55 a barrel, half its level of a year ago and a massive blow to a country that relies on crude sales for 80 percent of government revenues and 95 percent of foreign exchange.
Outside the capital, huge road-building projects lie deserted and half-finished and cranes stand idle across its skyline, testament to a construction sector pole-axed by the government's difficulty in paying its bills.
Foreign reserves have dropped by a third in the last year to below $30 billion.
Against such a backdrop, Buhari - now free of the need to get elected - will have few options but to cut Nigeria's cloth to a more appropriate size, analysts say.
"Nigeria has been postponing a really important macro-economic adjustment because of the sensitivity of voters," said Jan Dehn, head of research at Ashmore Group, an emerging markets investment manager. "That's really critical for investors."
'LEAST AWFUL'
In practical terms, that means cutting government spending, hammering the corruption that overshadows every facet of life, and letting the naira find a more stable - and lower - footing to stem the bleeding of central bank dollar reserves.
"The currency still needs to adjust to take into consideration lower oil prices," said Claudia Calich, an emerging bond fund manager at M&G Investments in London. "The earlier they do this, the better."
Others said Buhari could be forced to take the unpopular move of hiking taxes to plug the gap left by oil receipts.
"We expect a reformist administration that will impose austere policies," said Yvonne Mhango, an economist at Renaissance Capital in Johannesburg. "Limited fiscal resources imply upside risk to taxes."
Meanwhile, Nigerians who have for the first time realized the power of an unfettered ballot box will be breathing down his neck demanding results - especially since voting was in many cases anti-Jonathan rather than explicitly pro-Buhari.
In a scathing Economist editorial that will not have been lost on many Nigerians, the magazine grudgingly endorsed Buhari as merely the 'least awful' of the two choices put before them.
"It's not so much that people love Buhari. But they were tired of this stagnation, this lack of movement, this seeming cluelessness of administration," said political analyst Ebun-Olu Adegboruwa.
"It's not so much 'Hosannah, Hosannah'. People will be crying 'Crucify him' if he's unable to perform."
(Additional reporting by Estelle Shirbon and Sujata Rao; Editing by Angus MacSwan)