Nkrumah's Ghana in 1960:  '' Nkrumahism is the Highest Form of Christianity!'' 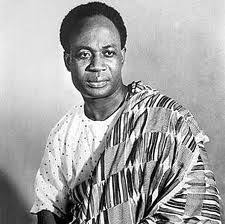 Carved on Nkrumah's statue in the center of Accra was a blatant parody of Jesus' words in the Sermon on the Mount, ''Seek ye first the political kingdom, and all other things shall be added unto it''.

''He assured me it would be(Religious freedom), as long as churches refrained from interference in political affairs. I knew that Christian believers would need great wisdom to avoid difficulties in the future''. 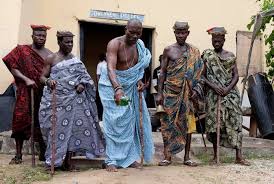 '' I knew that Africa could move in any of several directions- Communist, Islamic, animistic, or Christian- and I was there to promote the last'', Billy Graham

An editorial writer in Prime Minister Kwame Nkrumah’s party newspaper said, I should address my messages only to the European Christians living in that country; they were, in his word’’ the worst form of oppressors and hypocrites history has ever recorded’’.

Addressing the 14,000 people who were at the Accra Stadium for the Crusade Graham explained that he was not a Politician; but an Ambassador of Jesus Christ. In his words, ‘’…I tried to be diplomatic: I expressed admiration for the leadership( but deliberately kept silent about the policies) of Ghana’s Prime Minister-the nation’s founding father whom I looked forward to meeting in a day or so.

‘’ I …said that Christ was not a white man; he was a Middle Easterner, darker than I and lighter than they. I pointed out to them that when Jesus fell while carrying His cross, it was an African, Simon of Cyrene, who was pressed into service to carry it for Him. Jesus’s parents, I noted, had fled to Africa after He was born.

Billy Graham, taking the burden in his heart to Jesus Christ

Many people in other parts of Africa and elsewhere had grave concerns about Nkrumah, fearing he was turning Ghana into a dictatorship. The Prime Minister’s strong language against the European Colonial powers and his strong nationalism were undergirded by an aggressive personality cult that in some eyes bordered on the idolatrous. Carved on his stature in the centre of Accra was a blatant parody of Jesus’ words in the Sermon on the Mount: Seek ye first the political kingdom, and all other things shall be added unto it’’.

The time might soon come, one Ghanaian Pastor told us, when, ’When Ghana’s Christians may have to choose between Christ and the nation’’

Mr. Nkrumah received me cordially when I visited him in his official residence. It was, I believe, my first experience with a political leader who held such a tight rein on the hearts and minds of his people. I knew I could not hope to sort out all the political cross currents involved with his philosophy, nor was that my calling. I was, however, deeply concerned about the future of the Christian church under his rule.

After the preliminary courtesies were over, I told  Mr. Nkrumah I knew he was concerned for the future of his people and that every great nation cherished religious freedom. I expressed the hope that this would be the case with his nation as well. He assured me it would be, as long as churches refrained from interference in political affairs. I knew that Christian believers would need great wisdom to avoid difficulties in the future.

Worried as I was about this matter, I was blindsided by an altogether different issue in Ghana. At that time, many Africans were in a rage about an atomic test blast planned by the French in the Sahara Desert. Ghanaians feared that the harmattan wind from the North would waft radioactive dust over their land. Local reporters did everything they could to squeeze a comment out of me.
My silence-partly a result of an effort to abide by Mr. Nkrumah’s injunction against meddling in politics- made them jump on me all the more. Ghanaian reporters, in saying that I was a good actor and a good psychologist, implied that I was little more; the Associated Press quoted one of them as saying, ‘’Nkrumah’s is the highest form of Christianity’’. The reporters even turned my own words against me. As journalist Tom McMahan, who accompanied us, wrote in his account of our trip , Safari for Souls, they declared that ‘Christian civilization is today busily dragging Christ to Golgotha, and an African…is bearing the cross for the son of man, This African is Kwame Nkrumah’’.


This whole issue was, I knew, a complex one, and I doubted that I could avoid offending people on one side or the other no matter what I said. The controversy did not follow us elsewhere, fortunately’’.
The culture may be different, but the message is the same for all cultures