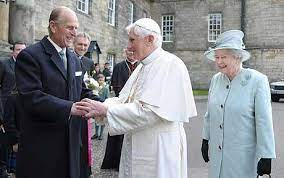 The Duke of Edinburg Prince Philip and Pope Francis. The Queen watched. 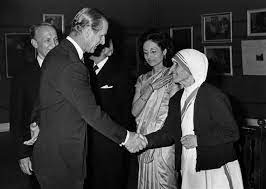 TRIBUTES continue to pour in following the announcement of the death of Prince Philip, Duke of Edinburgh, aged 99, earlier today.

Many have expressed respect for the way in which the Prince is acknowledged to have knuckled down to a role as the Queen’s consort which was distinctly unwelcome at the stage in life at which it came, and which cost him the naval career that he loved. There is respect and admiration for his rising above a childhood scarred by turbulence and family tragedies and spent largely in exile; and for his overcoming the hostility and suspicion of courtiers to a “foreign prince”.

The United Reformed Church statement said: “Many who have known the Duke of Edinburgh bear witness to the depth of his faith and his theological knowledge. A regular visitor to Mount Athos, and a keen questioner of preachers, his faith was much more than nominal.”

It went on to say: “Known for his blunt and forthright speech, and for being the man who was always one step behind the Queen, he was a determined supporter of his wife, an energetic sportsman, a committed conservationist, with the strength of character to remain steady through changing and difficult times.”

Baptised in the Greek Orthodox Church, Prince Philip was received into the Church of England before his wedding on 20 November 1947, in a private service conducted by the Archbishop of Canterbury, Dr Geoffrey Fisher, at Lambeth Palace.?

With the Dean of Windsor, Robin Woods, later to become Bishop of Worcester, he explored theology and the impact of faith on the world and was keenly interested in the relationship between scientists and theologians. Letters between the Prince and Michael Mann, later Dean of Windsor, on the concept of evolution, were published in 1984 as A Windsor Correspondence.

The Council of Christians and Jews expressed deep gratitude for the contribution that Prince Philip and his family had made to the strength of the relationship between Jews and Christians. It said: “We are confident that this legacy of quiet and faithful service will continue to be an inspiration to all those who work for reconciliation and cooperation between people of different faiths and communities.”

Prince Philip was described by the John Templeton Foundation as “a great friend of the Templeton Prize for many years”. He presented the first award to Mother Teresa in 1973, and continued to participate in a private ceremony for the prizewinner held at Windsor Castle or Buckingham Palace.

When presenting the award to Mother Teresa, Prince Phillip had said: “At first sight, the idea that a prize might be able to do something for religion seems faintly absurd. . . I respected the intention of [Mr Templeton’s] imaginative proposal and I have every confidence in the judges, but I doubted whether it would work. . . It is really Mother Teresa who made this Prize work in the way it was intended.”

Paul Williams, Chief Executive of the Bible Society, of which the Queen is patron, said: “We join with millions in giving thanks to God for his contribution to the life of our nation, and most of all his long and loving partnership with our Queen. We pray for her, for Prince Charles, Princess Anne, Prince Andrew and Prince Edward, and for all who mourn his loss.

“May God bless them and comfort them in their grief, and assure them of his loving purposes for them.”

Church of England bishops have contributed their memories of their encounters with Prince Philip. The Bishop of Dover, the Rt Revd Rose Hudson-Wilkin, said: “A special memory I have of him was when I was received at Buckingham Palace as one of Her Majesty’s chaplains — I recall him joking with my girls. I will hold Her Majesty and her extended family in my prayers as they mourn the loss of his Royal Highness the Duke of Edinburgh.”

The Archbishop of York, the Most Revd Stephen Cottrell, said: “Prince Philip was patron to hundreds of charitable organisations, covering a wide range of disciplines all of which benefited from his wit and wisdom and his inquisitive mind.”

The Bishop of London, the Rt Revd Sarah Mullally, said: “Her Majesty The Queen’s words about her husband Prince Philip over 20 years ago remain as true today: we owe him a debt greater than he would ever claim, or we shall ever know.”

Many bishops touched on what the Bishop of Lichfield, Dr Michael Ipgrave, described as Prince Philip’s life of service, commitment, and courage. “He has been constantly loyal in his support of the Queen and tireless in his engagement with people of all communities across our country. His advocacy for young people, for conservation and for a wide range of charitable activities has been remarkable, and an inspiration to us all.”

The Bishop of Durham, the Rt Revd Paul Butler, said: “An exile as a baby from his native Greece, Prince Philip committed himself and his future to the United Kingdom. He is well remembered for his love of a wide range of sports, his sense of humour, and his long and devoted marriage to the Queen. As one baptized in the Orthodox faith, Prince Philip shared in a truly global Christian faith. May he rest in peace and rise in glory.”

The President and Vice-President of the Methodist Conference, the Revd Richard Teal and Carolyn Lawrence, said: “We were deeply saddened to hear of the death of His Royal Highness The Prince Philip, Duke of Edinburgh.

“We will remember Prince Philip’s dedicated support of Her Majesty The Queen for over 70 years, and his long and exceptional service to the country and to the Commonwealth. We thank God for the Duke’s commitment to hundreds of voluntary organisations and the positive impact his Award Scheme has had on the lives of millions of young people.”

The news was received with sadness in the Anglican Communion. Its deputy secretary-general, the Revd Dr Will Adam, said. “During his long life of public service, his Royal Highness visited a large number of the nations where Anglicans are present; and he has worshipped in Anglican churches around the world.

“His example of duty and service and of care and concern for the environment and for young people will live on. Anglicans around the world will be united in prayer entrusting His Royal Highness to God’s love and mercy and praying for the Queen, her family and all who mourn.”

The Scottish Episcopal Church has also expressed its deep sadness. On behalf of the College of Bishops and the Church, the Primus, the Most Revd Mark Strange, said: “We send our love and prayers to Her Majesty and her family on this sad occasion, as they mourn the loss of such a significant figure who has been at the heart of the British Royal Family for more than seven decades.

“We give thanks for the Duke of Edinburgh’s long and faithful role as consort to the monarch, and for his steadfast love of his Scottish home at Balmoral as well as Scottish traditions.

“He leaves behind a tremendous legacy in the shape of The Duke of Edinburgh’s Award, the youth development programme he founded which has made an enormous difference to the lives of millions of young people here and around the world.”

The Archbishop of Armagh, the Most Revd John McDowell, said: “Prince Philip accepted and developed a unique role in the life of the United Kingdom, always closely supporting the Queen as her ‘liege man of life and limb’, and continuing to serve in an active public life which continued long after many would have sought to lay aside a heavy burden of public service. My prayers will be with the Royal Family in the days to come.”