Ukraine: What You can Do

‘’ Competition for AI superiority at national level most likely cause of WW3 imo," Musk said in another tweet, using the Internet short-hand for "in my opinion." Elon Musk, CNN BUSINESS 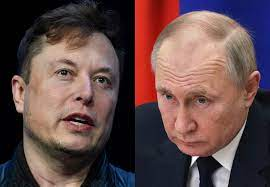 Elon Musk of Tesla and Vladimir  Putun of Russia

Inspite of the dire reality of war, what you can know?

Is there personal or corporate victory for God’s people?

What are the principles for accomplishing such victory?

"Competition for AI superiority at national level most likely cause of WW3 imo," Musk said in another tweet, using the Internet short-hand for "in my opinion."

The dire prediction was in response to a recent comment from Russian President Vladimir Putin. "Artificial intelligence is the future not only of Russia but of all of mankind," Putin said. "Whoever becomes the leader in this sphere will become the ruler of the world."

At the moment, the United States, China and India are the three countries leading the AI race, according to one top tech industry executive.

But Musk believes other country  will try to catch up by any means possible. "Governments don't need to follow normal laws," he said in one tweet. "They will obtain AI developed by companies at gunpoint, if necessary." Elon Musk had earlier backed calls for global ban on killer robots.

But much more scary he had in a speculated that an AI system could choose to start a war "if it decides that a prepemptive [sic] strike is most probable path to victory."

Musk has repeatedly issued warnings about the perils of AI, calling for new regulation to keep the public safe. He has new plan to save humanity from AI

Musk has tried to address his AI anxieties through two new ventures: OpenAI, a non-profit AI research company, and Neuralink, a startup building devices to connect the human brain with computers.

Well we still have human brains in the scheme of things. But let’s we forget and commit treason like Adam who handed over his authority to dominate the earth to satan, we must keep our focus on divine pronouncements to command the affairs of this world. Here, we shall be providing the required knowledge of God to do that.

The earth is the LORD's, and the fulness thereof; the world, and they that dwell therein. For he hath founded it upon the seas, and established it upon the floods. Who shall ascend into the hill of the LORD? or who shall stand in his holy place?’’  Psalm 24:1

” This matter is by the decree of the watchers, and the demand by the word of the holy ones: to the intent that the living may know that the most High ruleth in the kingdom of men, and giveth it to whomsoever he will, and setteth up over it the basest of men.” Daniel 4:17

1 ’’ The king's heart is in the hand of the Lord, as the rivers of water: he turneth it whithersoever he will. 2 Every way of a man is right in his own eyes: but the Lord pondereth the hearts.3 To do justice and judgment is more acceptable to the Lord than sacrifice’’. Proverb 21:1-3

“That frustrateth the tokens of the liars, and maketh diviners mad; that turneth wise men backward, and maketh their knowledge foolish;”Isaiah 44:25

“Howbeit we speak wisdom among them that are perfect: yet not the wisdom of this world, nor of the princes of this world, that come to nought:” 1Corinthians 2:6

There is no comforting respite for the synonyms of the word war even in this  21st Century where Human Civilization is purported at a dizzying height. What are these synonyms that evoke horror?

Put in context, the Prophet's Dictionary by Paula A. Price, defines warfare as, ''Hostile or competitive battle between enemies or rivals where something of value is at stake or may be lost.'' 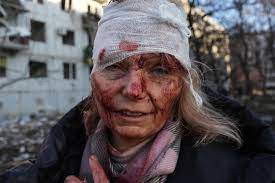 Ukrainian woman who became bloodied face of war: 'I never thought this would happen in my lifetime.' 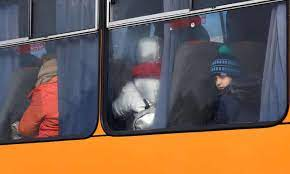 Let the horror in Ukraine open our eyes 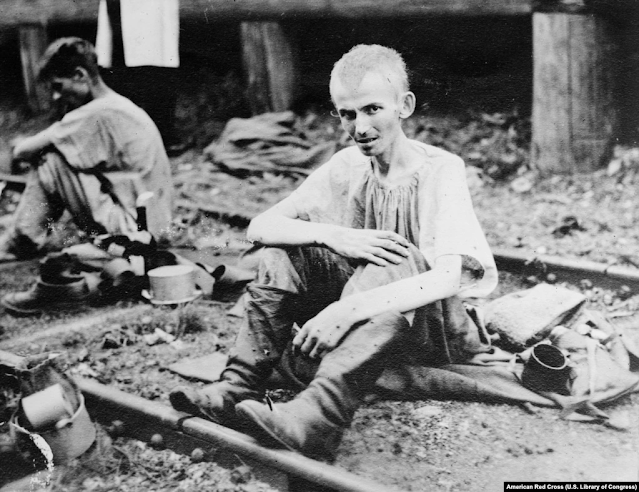 A starving Russian soldier. The context of this picture is unclear, but after Lenin pulled Russia out of World War I, one of the most urgent tasks of the American Red Cross was to tend to Russian troops released from the POW camps of Germany and its WWI allies.

The Bible is strewn with human and divine battles. War is part of the history of man even in the Bible. About 28 physical wars or battles are recorded in the Bible. The first recorded one is  in Genesis Chapter 14:1-17 not the Battle of Refidim(or Rephidim) as written by  Wikipedia, the free encyclopedia.

The Battle of Refidim (or Rephidim) is estimated at  5,000–7,000, as described in the Bible. It was a battle between the Israelites and the Amalekites, which occurred in Rephidim while the former were moving towards the Promised Land. The description of this battle can be found in the Book of Exodus. According to Exodus 17:8–13, following the Israelite's escape from Egypt,  they camped in Rephidim.

The first recorded physical battle, therefore,  in the Bible is narrated  in Genesis 14: 1-17.

14 ''And when Abram heard that his brother was taken captive, he armed his trained servants, born in his own house, three hundred and eighteen, and pursued them unto Dan.

15 And he divided himself against them, he and his servants, by night, and smote them, and pursued them unto Hobah, which is on the left hand of Damascus.

16 And he brought back all the goods, and also brought again his brother Lot, and his goods, and the women also, and the people.

From an independent source that confirms biblical accounts, an extraordinary insights into Jewish thought, background and history, Josephus who understand the world of Jesus and the Apostles and saw it,  recounts how Abram fought with the Assyrians and overcame them, and saved the Sodomite prisoners, took from the prey they had gotten.

176 ''When Abram heard of their calamity, he was once afraid for Lot his kinsman, and pitied the Sodomites, his friends and neigbours; 177 and thinking it proper to afford them assistance, he did not allow it, but marched hastily, and the fifth night fell upon the Assyrians, near Dan, for that is the name of the other spring of Jordan; and before they could arm themselves, he slew some as they were in their beds, before they could suspect any harm; and others, who were not yet gone to sleep, but were so drunk they could not fight, ran away. 178 Abram pursued after them, till on the second day he drove them in a body unto Hoba, a place belonging to Damascus; and thereby demonstrated that victory does not depend on multitude and the number of hands, but the alacrity and courage of soldiers overcome the most numerous bodies  of men, while he got the victory over so great an army with no more than three hundred and eighteen of his servants and three of his friends: but all those that fled returned home ingloriously...181Now this Melchizedec supplied Abram's army in an hospitable manner, and gave them provisions in abundance;and as they were feasting he began to praise him, and to bless God for subduing his enemies under him''.(The Antiquities of the Jews 1.9.1;1.10.1;1.10.2)

16. ‘’For we have not followed cunningly devised fables, when we made known unto you the power and coming of our Lord Jesus Christ, but were b eyewitnesses of his majesty.’’ 2 Peter 1:16

‘’The Christian message does not rest on myth and legend, but on the evidence of eye witnesses. In this case Peter actually saw Jesus in all his glory- transformed. And in addition we have the written testimony of the prophets- not simply human opinion but a word from God Himself. But God Who knows our carnal frame many times leaves material evidence to satisfy our scientific and sensory dependence.

Werner Keller in the Bible As History writes, ‘’Among the captives of the foreign kings was Lot. He was set free again by his uncle Abraham (Genesis 14:12-18), who with his followers dogged the withdrawal of the army of the victorious four kings like a shadow. He watches it unobserved from safe cover, makes accurate reconnaissance and bides the time. Not until they reach Dan, on the Northern frontier of Palestine does the opportunity arise  for which he has been waiting. Like lightening, under cover of darkness, Abraham and his men fall on the rearguard and in the confusion that follows Lot is set free.-Only those who do not know the tactics of the Bedouins will consider this an unlikely story’’.

‘’Among the inhabitants of that stretch of country the memory of that punitive expedition has remained alive to this day. It is reflected in the name of a road which runs eastward of the Dead Sea and parallel with it, traversing what was in ancient times the land of Moab and leading to the North. The nomads of Jordan know it very well. Among the natives it is called, remarkably enough, the ‘’ King’s high way’’ or ‘’the high way’’. It was the road that the children of Israel wished to follow on their journey through Edom to the ‘’Promised Land’’. ‘’ Let us pass, I pray you, through your country. …We will go along the king’s highway;…’’ (Numbers 20:17,19). In the Christian era the Romans used the ‘’King’s Way’’ and improved it. Parts of it now belong to the network of roads in the new state of Jordan. Clearly visible from the air the ancient track shows up as a dark streak across the country’’(88,89).

Next Post:  Inspite of the dire reality of war, what you can know?

What do you think?

You may also reach us at weightier@gmail.com