When Ukraine Became A Christian Nation In A Day 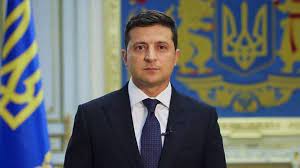 President of Ukraine Volodymyr Oleksandrovych Zelenskyy
Posted by Ambassador T. Brikins
''Who has heard of such a thing? Who has seen such a thing? Shall a land be born in one day? Or shall a nation be brought fought in a moment? For as soon as Zion was in labor, she brought forth her children.'' Isaiah 66:8
The footnote in the Amplified Bible comments that, ''Never in the history of the world had such a thing happened before - but God keeps His word. As definitely foretold,'above', '' and in Ezekiel 37:21,22, Israel became a recognized nation, actually ''born in one day''. After being away from their home land for almost two thousand years, the Jews were given a national home land in Palestine by the Balfour Declaration in November, 1917.
In 1922, the League of Nations gave Great Britain the mandate over Palestine. On May 14, 1948, Great Britain withdrew her mandate, and immediately Israel was declared a sovereign state, and her growth and importance among nations became astonishing''.
But 960 years, in 988, before this event a similar but a much more event of spiritual significance and proportions took place in Kiev, Ukraine. While Israel's dispersion came out of disobedience to God's word, Ukraine's birth as a Christian nation came in obedience to God's word. The Quest For a New Religion Results in the Christianization of a Nation in a Single Day in 988 '' To the Protestant mind, conversion is understood in terms of an individual's act of dedication and acceptance of Jesus Christ as Lord and Saviour. But the idea of a whole people turning to Christ at the command of a ruler seems inconceivable. Yet in 988, Prince Vladimir of Kiev, in the Ukraine, ordered his subjects to gather at the River Dnieper to receive the rite of baptism, thereby establishing Christianity as the religion of Kievan Russia. 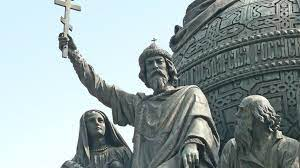 The Great Prince Vladimir of Kiev
'' The cradle of Christianity was the southern city of Kiev, in the state of Rus, which came to prominence towards the end of the ninth century. Its rulers were Varangians (or Russes) who had been invited by the quarreling Slavic tribes to enter the region and restore order. In 882 they occupied the city of Kiev and brought the Slavic tribes under their control. Although a pagan people, there may have been a christian presence on the land for several centuries. Legend has it that between AD 50 - 60 the Apostle Andrew visited the region, then known as Scythia, and made converts.
Paul mentioned the region in Colossians 3:11.''[In this new creation all distinctions vanish.] There is no room for and there can neither Greek nor Jew, circumcised nor uncircumcised, [ nor difference between nations whether alien ] barbarians or Scythians [who are the most savage of all], nor slave or free man; but Christ is all and in all [everything and everywhere, to all men, without distinction of person].
Then as the state of Kiev bordered on the ancient world of Greece, Rome and Byzantium, several Bishoprics were established in the fourth century among the Greek colonies along the Black Sea. Nevertheless, the Faith did not take root, and it was not until the ninth century that more favourable conditions existed for the gospel. It was quite likely that Christianity was reintroduced into the region following the evangelisation of the Slavic tribes by the missionaries Cyril and Methodius (c 860). There may have been a diocese of the Byzantine Church at Kiev as early as 867; and there was at least one church in the city early the following century.
There were known converts among the Kievan merchants , knights and soldiers, and it appears there was even a number of believers at Court. It was possible from them that the Princess Olga learned of the Faith, though she did not declare her belief until some years after her husband's death.
Princess Olga 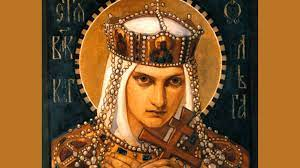