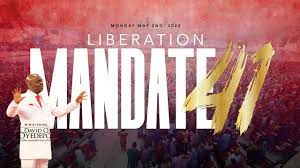 ‘’How do you get things done so cheaply in this Ministry’’, Bishop Oyedepo was asked.

‘’We do nothing except it is commanded’’, he replied.

The foundational commandment or mandate came 41 years ago  while on his knees praying. He speaks.

'' Behold, as I knelt down to give thanks in the wonderful room, the encounter began! This lasted for eighteen hours. In that great vision, I saw a line up of the afflicted and oppressed,broken, beaten, battered, the blind, the lame and the wretched. I saw all kinds of deformities, that I was greatly bewildered. I heard their wailing as they filed past  me. Their groaning was so intense that I could almost feel their pain''.

‘’ I could not help it, and I began to cry and sob along with them. ''Lord, why is this ?'', I asked. I heard God say to me, And from the beginning it was not so. I broke down the more in tears. In the midst of all that I kept asking, ''but why Lord?'' And I heard God say distinctly to me,And from the beginning it was not so and now,the hour has come to liberate the world from all oppressions of the devil, through the preaching of the Word of Faith; and I am sending you to undertake this task.’’

A Mandate is an official trust or authority handed over by a superior to a subordinate to give authority to act, judge, or govern as a representative of a court, country or sovereign. It applies to jurisdiction, territory, and execution of official business. In times past this was thought of as a causative term used to identify a charge delivered by a pastoral or angelic official via a specific message’’. The Prophet’s Dictionary by Paula A. Price, PhD.

In Biblical context, ’’The Creation Mandate, sometimes called the dominion mandate or the cultural mandate, describes God's words to Adam and Eve in Genesis 1 explaining how to be good stewards of His creation. When we think of a mandate, we usually think of a command, but the creation mandate is not just a command—it's a divine blessing’’. Biblical mandates often define problems and proffer solutions.

So as Bishop David Oyedepo explained regarding the mandate God gave him. ‘’I spent the next few days trying to analyze the content of the vision, and to understand its import, so as to know how to carry it out.

‘’I came to discover that the Liberation Mandate defined four vital issues:

The target: The world

The tool: The preaching of the word of faith

The time: Now-And now the hour has come

Even God had a mandate right from the beginning.

'' In the beginning God ([a]Elohim) [b]created [by forming from nothing] the heavens and the earth. 2 The earth was [c]formless and void or a waste and emptiness, and darkness was upon the face of the deep [primeval ocean that covered the unformed earth]. The Spirit of God was moving (hovering, brooding) over the face of the waters'' Genesis 1:1,2.

God’s  vision was to make man. But He had to create a conducive environment for him to live in. This He did from Genesis 1: verse 1 to 25.

Then He announced His purpose in verse 26. '' Then God said, “Let Us (Father, Son, Holy Spirit) make man in Our image, according to Our likeness [not physical, but a spiritual personality and moral likeness]; and let them have complete authority over the fish of the sea, the birds of the air, the cattle, and over the entire earth, and over everything that creeps and crawls on the earth.” 27. So God created man in His own image, in the image and likeness of God He created him; male and female He created them. 28 And God blessed them [granting them certain authority] and said to them, “Be fruitful, multiply, and fill the earth, and subjugate it [putting it under your power]; and rule over (dominate) the fish of the sea, the birds of the air, and every living thing that moves upon the earth.” Genesis 1:26-28

When Adam and Evil fell God announced another mandate against Satan. “And I will put enmity (open hostility)

Between you and the woman,

And between your seed (offspring) and her [a]Seed;

He shall [fatally] bruise your head,

Then the effect of the fall from a dominion mandate to the dominion  of bondage began. As the children of Israel in Egypt cried under the yoke of slavery God visited a hitherto, a patriotic fugitive turned Shepherd in the wilderness. ‘’One day, Moses took his father-in-law’s flock to graze near the Mountain of Horeb. Suddenly, an angel of God appeared to him in a blazing fire out of a bush. Moses looked and saw that the bush burned, but was not consumed’’.

Then He said, “I am the God of your father, the God of Abraham, the God of Isaac, and the God of Jacob.” Then Moses hid his face, because he was afraid to look at God. The LORD said, “I have in fact seen the affliction (suffering, desolation) of My people who are in Egypt, and have heard their cry because of their taskmasters (oppressors); for I know their pain and suffering.

So I have come down to rescue them from the hand (power) of the Egyptians, and to bring them up from that land to a land [that is] good and spacious, to a land flowing with milk and honey [a land of plenty]—to the place of the Canaanite, the Hittite, the Amorite, the Perizzite, the Hivite, and the Jebusite.

And God said, “Certainly I will be with you, and this shall be the sign to you that it is I who have sent you: when you have brought the people out of Egypt, you shall serve and worship God at this mountain.” Exodus 3:6-12. God promise to send another in the like of Moses.

So we see semblance in the mandate of Moses and Jesus Christ. Moses had become  liberator of the Hebrew people from the slavery of Egypt. Another liberator was coming with the mandate to offer eternal life.

Approximately  1600 years separated Moses and Christ. Fourteen generations  span the time from Jeconiah, born about 616 BC, to Jesus, born circa 4 BC. The average generation gap would be around forty-four years.

This distance in  years did not diminish New Testament writers from  often comparing  Jesus's words and deeds with Moses's to explain Jesus's mission.

“The Spirit of the Lord is upon Me (the Messiah),

Because He has anointed Me to preach the good news to the poor.

He has sent Me to announce release (pardon, forgiveness) to the captives,

And recovery of sight to the blind,

To set free those who are oppressed (downtrodden, bruised, crushed by tragedy),

to proclaim the accepted and acceptable year of the Lord [the day when salvation and the free favors of God profusely abound’’.

What a replication of the mandate!’’ Jesus gives a summation of who the gospel is for: the poor, the broken hearted, the captives, the blind,the bruised(oppressed). Jesus is not referring to those who lack financial resources when He speaks of the poor. The word means’’meek,humble, lowly’’ and refers to the’’ poor in spirit’’(Matthew 5:3)

The blind are those whom ‘’ the god of this world has blinded…[to] the light of the glorious gospel of Christ’’.(2 Corinthians 4:4)

The Mandate continues from to the disciples. Then Jesus said to them again, “Peace to you; as the Father has sent Me, I also send you [as My representatives].” John 20:21

Then Jesus Christ hands over the baton over to the Holy Spirit.

''That which has been is that which will be [again],

So there is nothing new under the sun'' Ecclesiastes 1:9.

But I tell you the truth, it is to your advantage that I go away; for if I do not go away, the [a]Helper (Comforter, Advocate, Intercessor—Counselor, Strengthener, Standby) will not come to you; but if I go, I will send Him (the Holy Spirit) to you [to be in close fellowship with you]. 8 And He, when He comes, will convict the world about [the guilt of] sin [and the need for a Savior], and about righteousness, and about judgment: 9 about sin [and the true nature of it], because they do not believe in Me [and My message]; 10 about righteousness [personal integrity and godly character], because I am going to My Father and you will no longer see Me; 11 about judgment [the certainty of it], because the ruler of this world (Satan) has been judged and condemned''.

12 “I have many more things to say to you, but you cannot bear [to hear] them now. 13 But when He, the Spirit of Truth, comes, He will guide you into all the truth [full and complete truth]. For He will not speak on His own initiative, but He will speak whatever He hears [from the Father—the message regarding the Son], and He will disclose to you what is to come [in the future]. 14 He will glorify and honor Me, because He (the Holy Spirit) will take from what is Mine and will disclose it to you. 15 All things that the Father has are Mine. Because of this I said that He [the Spirit] will take from what is Mine and will reveal it to you.''.John 16:12-15.

Bishop David O. Oyedepo has had 34  encounters up to 2012; direct from God's words and  with many women and men of God; namely Pastor E.A. Adeboye,Archbishop Benson Idahosa(May 23,1987), Corporate Tithing(September 4,1987)Gloria and Kenneth Copeland, Smith Wiggleworth, etc. 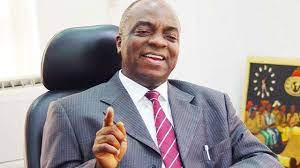 ‘’We do nothing except it is commanded’. Bishop David Oyedepo

However, the encounter  with Kenneth E. Hagin is akin to that between  Elijah and Elisha. While Elisha received Elijah’s mantle Bishop Oyedepo received the baton of faith from Kenneth E.Hagin in a most spiritual encounter.

He speaks. ''My encounter with Kenneth E. Hagin. (July 23, 1986)I went to Kenneth Hagin's Convention in Tulsa, in 1986, with desperation for an encounter with the Holy Spirit of God at work in the man of God, having been his student since 1976, largely through his books and continuous inspiration from the Word of Faith magazine. And coupled with the fact that I have a Word of Faith Ministry, I saw his ministry as role model and I committed myself to drawing from him. On that trip, my heart cry was 'Whatever makes Hagin Hagin, I want it'. In that afternoon session at  the convention

I stayed focused on the man of God as he was ministering . Suddenly, with my eyes opened, I saw his face transfigured and it became like the face of a little baby. And I saw anointing oil, as it were, dripping down his cheek. At that moment,something electric was fired into my being and I broke down sobbing uncontrollably. In the course of this sobbing, the Lord said to me,'My son David,the baton has been passed over to you'.Today, by the grace of God, I am holding the baton of the Word of Faith to my generation. Taking off, as it were, from where Hagin left off''