David Cameron and Ed Miliband have highlighted the persecution of Christians in their Easter messages.

The prime minister said it was "shocking" to know people abroad were still being "threatened, tortured - even killed" because of their faith.
Labour's Mr Miliband wrote that people in the UK "must do everything we can" to condemn oppression, highlighting the plight of Christians in Syria and Iraq.
Lib Dem leader Nick Clegg condemned Thursday's killings in Kenya.
Some 148 people were killed as militant group al-Shabab attacked students at Garissa University.

As the pace of general election campaigning slowed on Easter Sunday, Mr Cameron published his Easter message on YouTube, highlighting the role of the Church at home.
The prime minister hailed the Church as a "living active force doing great works" for the poor and homeless and urged Britain to "feel proud to say this is a Christian country".

This election issue includes foreign policy and the role of UK’s defence forces at home and abroad.
Compare parties' policies
The Conservative leader, whose severely disabled son Ivan died in 2009, said that he knew "from the most difficult times in my own life, that the kindness of the Church can be a huge comfort".
And on the oppression of Christians, he said: "We have a duty to speak out about the persecution of Christians around the world too.
"It is truly shocking to know that in 2015, there are still Christians being threatened, tortured - even killed - because of their faith".
He added: "In the coming months, we must continue to speak as one voice for freedom of belief."

Mr Miliband, who published his message on Facebook, highlighted statistics from the International Society for Human Rights, which suggest Christians are the victims of 80% of acts of religious discrimination in the world. 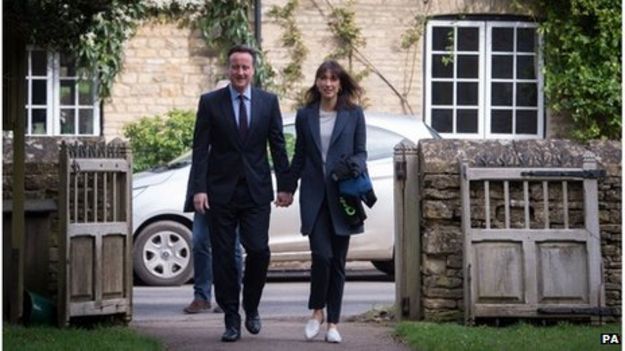 The Labour leader wrote: "We must all do everything we can to speak out against this evil and work to alleviate the suffering of those who are persecuted simply for their creed."
He also praised church members and charities who "provide support and hope to those in need" in the UK.
He wrote: "In the months to come I hope that we will all stand up for justice, serve the most vulnerable and work to positively transform our communities together."
Liberal Democrat leader Nick Clegg, meanwhile, wrote on Twitter: "While politicians in the UK are busy on the campaign trail, we must not forget the cruel and barbaric killings that took place in Kenya."
He added: "The thoughts of people here are very much with the families and friends of the murdered students in Garissa University."
Mr Clegg said later that Easter was "a time of reflection and renewal" when everybody has a chance "to take stock of what is truly important to them and their families".
And he hailed "the moving and powerful story of Jesus's sacrifice and resurrection".
UKIP leader Nigel Farage wished people "a restful and enjoyable day".