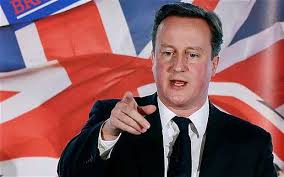 Mark Strichez, Aleia
Prime Minister David Cameron of the United Kingdom said on Sunday that Britain is still “a Christian country” and praised the contribution of Christians to the well-being of society. In a televised address on the first day of Easter, Cameron specified the charitable works of the country’s Christians and vowed that Britain would do more to help persecuted Christians in the Middle East, according to The Telegraph, a British newspaper:


In his message, Mr Cameron said: “Across Britain, Christians don’t just talk about ‘loving thy neighbour’, they live it out… in faith schools, in prisons, in community groups.
"And it’s for all these reasons that we should feel proud to say, ‘This is a Christian country.’ The church is not just a collection of beautiful old buildings. It is a living, active force doing great works across our country.

"We have a duty to speak out about the persecution of Christians around the world too.
"It is truly shocking to know that in 2015 there are still Christians being threatened, tortured, even killed, because of their faith from Egypt to Nigeria, Libya to North Korea.

Cameron, 49, is the political leader of the Tories and has been prime minister since 2010. His words were spoken two days before President Obama addressed the Easter Prayer Breakfast at the White House.

In contrast to Cameron, Obama took aim at his Christian political opponents, suggesting they have been spiteful and rude: "On Easter, I do reflect on the fact that as a Christian, I am supposed to love. And I have to say that sometimes when I listen to less than loving expressions by Christians, I get concerned. But that's a topic for another day," he said.

In addition, Obama did not mention the works of Christians specifically. He used the pronoun “we” to describe those who fight injustice and act kind toward others, leaving his listeners uncertain if he referred to Christians or Americans or both.

For conservatives, Cameron’s speech showed that Obama is more critical than affirming of Christianity. Obama mentioned what he regarded as the historical failings of Christians during his speech at the National Prayer Breakfast in February.

Yet Obama praised Pope Francis and cited Dr. Martin Luther King, Jr. during his speech Tuesday. And the list of attendees included several Catholic luminaries, according to the Catholic Herald, a British newspaper:


Among the Catholic participants spotted in the room were Cardinal Donald Wuerl of Washington, Sister Carol Keehan, a Daughter of Charity who is president and CEO of the Catholic Health Association, Mgr Ronald Jenkins, general secretary of the US Conference of Catholic Bishops, Jesuit Fr Tom Reese, a columnist for the National Catholic Reporter, and White House staffers that included Chief of Staff Denis McDonough.

But Obama's words and invitees are unlikely to mollify his religioious critics.
at 3:19 AM