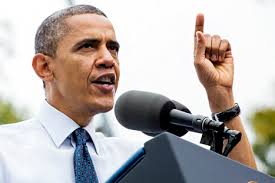 U.S. President Barack Obama is calling for free and fair elections in Nigeria this Saturday -- and for Nigerians to reject the violence that has marred the country's previous polls.
In a video released Monday by the U.S. embassy in Abuja, President Obama said successful elections are key to stopping insurgent group Boko Haram and allowing more than a million displaced Nigerians to return to their homes.
"So I call on all leaders and candidates to make it clear to their supporters that violence has no place in democratic elections -- and that they will not incite, support or engage in any kind of violence -- before, during, or after the votes are counted," Obama said.
"I call on all Nigerians to peacefully express your views and to reject the voices of those who call for violence. And when elections are free and fair, it is the responsibility of all citizens to help keep the peace, no matter who wins."
Nigerian President Goodluck Jonathan is running for re-election against former military ruler Muhammadu Buhari. Allegations of vote rigging after Jonathan won the 2011 polls set off violent protests in the north that killed some 800 people.
Jonathan's PDP party has won every national election since Nigeria returned to democracy in 1999.
Analysts say this time around, the party faces a tougher challenge because of a united opposition and the ongoing Boko Haram insurgency. The Islamist extremist group has killed thousands of people since 2009 and forced more than a million Nigerians from their homes.
The Nigerian military has recently retaken most of the Boko Haram-occupied towns with the help of forces from Chad, Niger and Cameroon and a number of foreign mercenaries.