Pastor Enoch O. Adeboye says to the Nigeria Police Force : "Safety is of the Lord" 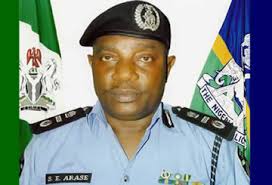 Pastor Adeboye, the General Overseer of the Redeemed Christian Church of God(RCCG),in a special session titled "Divine Security",said ,”Safety is of the Lord. He said this  in his sermon yesterday to the Nigeria Police Force who  is charged with  safety and security in Nigeria at the Headquarters of the Church at Ebute Metta in Lagos, West of Nigeria.

Using as a premise, Proverbs 21:31.”The horse is prepared against the day of battle: but safety is of the Lord”, he divided the subject into  physical and spiritual safety,showing  that , no man can protect you against disease, protect you 24/7 366 days, protect  you  against God's Anger and protectors need protection.

Physical Protection.
No man can protect you against disease.
2Kings 5:1, “Now Naaman, captain of the host of the King of Syria, was a great man with his master, and honorable, because by him the Lord had given deliverance unto Syria: he was also a  mighty man in valour, but he was a leper”.
Naaman was a General in the army. Leprosy passed all the Guards. His exalted office could not stop disease from attacking him.
However, in Exodus 15:26, God promises protection against diseases, ”And said, if thou wilt diligently hearken to the voice of the Lord thy God, and wilt do that which is right in His sight, and wilt give ear to His commandments, and keep all His statutes, I will put non of these diseases upon thee, which I have brought upon the Egyptians: for I am the Lord that Healeth thee”.
Only God can protect you against disease.
No Man can Protect you 24/7 366 days.
1 Samuel 26:2-7,5,12,”Then Saul arose, and went down to the wilderness of Ziph, having three thousand chosen men of Israel with him, to seek David in the the wilderness of Ziph…and Abner, the son of Ner, the captain of his host: and Saul lay in the trench, and the people pitched round about him…So David took the spear and the cruse of water from Saul’s  bolster; and they gat them away, and no man saw it, nor knew it, neither awaked : for they were all asleep; because a deep sleep from the Lord was fallen upon them”.

3,000 Body Guards fell asleep.These were specially selected soldiers to ensure the king's security and  protection.  God gives His condition for protection and shows Himself as the ultimate protector in Psalm 128:1-8, “Blessed is every one that feareth the Lord; that walketh in His ways. For thou shall eat the labour of thy hands: happy shalt thow be, and it shall be well with thee…”
Psalm 4:8.”I will both lay me down in peace, and sleep: for thou, Lord, only makest me dwell in safety”.

Pastor Adeboye told of how he went to his office at 3:00am and found his security guards fast asleep. One of them had taken off  his pair of shoes and  arranged chairs for bed.

Spiritual Protection
No Matter how determined you are no one can stop demons.
1Samuel 16:14.”But the Spirit of the LORD departed from Saul, and an evil spirit from the LORD troubled him”.
Jeremaih 17:5-8.”Thus saith the LORD; Cursed be the man that trusted in man, and maketh flesh his arm, and whose heart departeth from the LORD.
For he shall be like the heath in the desert, and shall not see when good cometh; but shall inhabit the patched places in the wilderness, in a salt land and not inhabited.
Blessed is the man that trusted in the LORD, and whose hope the LORD is.
For he shall be as a tree planted by the waters, and that spreadeth  out her roots by the river, and shall not see when heat cometh, but her leaf shall be green; and shall not be careful in the year  of drought,  neither shall cease from yielding fruit”.

The General Overseer said, before he was born again, he was instructed not to go to his village for  fear of being killed by witches. After 13 years, of heeding this instruction, he became home sick. A friend advised him to consult a witch doctor who will prepare protective charms for him. However, after the witch doctor was paid, he asked what village are you from?

When he told him, the witch doctor said his forebears and himself were actually trained in that village and concluded , “If they ask you not to go, don’t go”.

There is no Protection against the Anger of the Lord.
Daniel 4:28-37.”…While the word was in the King’s mouth, there fell a voice from heaven,saying, O King Nebudchanezzar, to thee it is spoken; the Kingdom is departed from thee…”
Acts 12:20-24.”…And upon a set day Herod, arrayed in royal apparel, sat upon his throne , and made an oration unto them.
And the people gave a shout, saying, It is the voice of a god, and not of a man.
And immediately the angel of the LORD smote him, because he gave not God the glory: and he was eaten of worms, and gave up the ghost…”.

Protectors need Protection.
In the fashion of the guide in “Acres of Diamond”, Pastor E.O.Adeboye narrated how a cab driver in Israel told him that Armed robbers came to the police station and took away the safe containing  salaries.

Though they were doing their duty,  they were consumed by superior power.
He prophesied,”My Father in heaven will protect you”.

Conclusion
Psalm 125:1-2.”They that trust in the LORD shall be as mount Zion, which cannot be removed, but abideth for ever.
As the mountains are round about Jerusalem, so the LORD is round about His people from henceforth even for ever.”

Contact: Ambassador T. Brikins
weightiermatter@gmail.com
234-8023131300
If you put your trust in the Almighty, He will surround you with a wall of fire that eyes cannot see.
There are many unseen forces around you. Forces in the office, from relations, home etc.
He will build a world of protection around you but you must surrender your life to Jesus Christ first.
The asked the service men to pray, "Father, you are the Lord of the Host, I commit my security and that of my family unto you".

Multitude of members of the Nigeria Police Force in the meeting gave their lives to Jesus Christ.

The Nigeria Police (NPF) is the principal law enforcement agency in Nigeria [3] with a staff strength of about 371,800.  The NPF is a very large organization consisting of 36 commands grouped into 12 zones and 7 administrative organs.[4] The agency is currently headed by IGP Solomon Arase .
Issues
Although generally considered an attractive career, the NPF experienced endemic problems with recruiting, training, inefficiency, and indiscipline, and it lacked expertise in specialized fields. Corruption and dishonesty were widespread, engendering a low level of public confidence, failure to report crimes, and tendencies to resort to self-help. Police were more adept at paramilitary operations and the exercise of force than at community service functions or crime prevention, detection, and investigation.
The NPF is alleged to follow a policy of "Fire for Fire" in which many captured suspects die in police custody or are "shot while attempting to escape". Decades of police and official corruption and continued failure to train police officers properly has led to a situation where extrajudicial killing is an accepted form of dealing with people the police believe to be criminals. The most recent victim of which is Yusuf Mohamed, the leader of the Boko Haram sect in Nigeria, was alive when captured by the army.]
Even before the violence surrounding the Boko Haram uprising in northern Nigeria, there were questions over the conduct of the security forces. The government is currently attempting to reform the police. They have produced a White Paper with 79 recommendations for improving the police force, which is due to be considered by the National Assembly and turned into a Police Reform Bill. Key reforms such as: Police officers are paid as little as $40 (£26) a month, this should be raised to $100 for police constables, Deal with the estimated 10,000 officers with criminal records hired between 2001 and 2004, Establish a reliable system for the public to complain about the police, better educated Recruits should attain a certain level of qualification before being considered, job applications should be transparently managed, policemen should not have to buy their own, the police are in dire need of an up-to-date communication network, and the police should be given better investigating tools and the training to use them