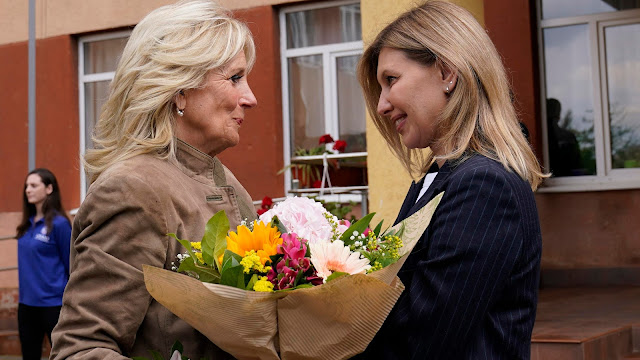 The first lady’s press secretary Michael LaRosa confirmed the visit to Uzhorod, which is near Ukraine’s border with Slovakia, in a Sunday morning tweet.

Biden said the surprise visit was timed to coincide with Mother’s Day and was intended as a gesture of support for the Ukrainian people, the Washington Post reported.

Zelenska called Biden’s visit to the war-torn country a “very courageous act” before the two first ladies began a closed-door meeting, according to the Post.

The secret visit came during Biden’s four-day trip to Eastern Europe: She previously met with Ukrainian refugees in the Slovakian border city of Košice, reportedly remarking to one woman that Russia’s invasion was “so hard to understand,” and she visited refugees and U.S. troops in Romania.

The White House has adopted a policy of not pre-announcing official visits to Ukraine as a security precaution. Nonetheless, Blinken, Austin and Pelosi—who was accompanied by Rep. Jason Crow (D-Colo.), House Rules Committee Chair Jim McGovern (D-Mass.), House Foreign Affairs Committee Chair Gregory Meeks (D-N.Y.) and House Intelligence Committee Chair Adam Schiff (D-Calif.)—have all undertaken visits to Kyiv, reflecting a close level of cooperation between the U.S. and Ukraine. The U.S. has also announced it plans to reopen its Kyiv embassy by the end of May, which was previously moved to Poland in the wake of the invasion.

5.8 million. That’s how many refugees have fled Ukraine since February 24, according to the United Nations High Commissioner for Refugees.

What do you say about the visit?